Brad has sent through final information for Stage 2 ethics clearance.  We included a skin biopsy protocol in case the fibroid cells are unviable. Unfortunately, when dealing with primary cells, nothing is certain and there is a possibility that the initial cells are contaminated or do not recover from the freezing process. As such, we have included ‘Plan B’ to ensure we can move forward with the project and establish a new batch of primary cells for immortalisation.

The ethics documents were formally submitted through the Ethics Review Manager. Hopefully, I have addressed all project aspects and provided sufficient information for approval.  Fingers crossed!

Today, I undertook my first day of hands-on lab training. To reduce workload for my kind hosts, I tagged along with 3rd year B/Med students. As part of a unit, they are doing a study into the effects of EGCG (Epigallocatechin Gallate) – an active ingredient in Green Tea which may have positive impacts on stroke patients.  For their study, they are testing the EGCG with HBVP pericyte cells.  The protocols covered today include: cell passage, cell counting and preparing 96-well plates with consistent cell numbers.

It was good to get back into the lab and go over the basics again.  Here is a short summary of the basic protocols involved in cell culture (with some additional insights from Jo-Maree in italics).

The cells are now ready for counting using a traditional haemocytometer – a glass slide with two chambers with a grid of 9 x 1mm squares used to count cells.

ON A SIDE NOTE:

Poly-L-lysine is the correct coating to promote cell adhesion on glass surfaces. Jo-Maree has some in stock, so I am all set to work with my Petri dishes as part o the initial cell culture training.

I have started preparing files in Rhino for laser engraving. This is a good Youtube introduction to setting up files with a some pointers for trimming and adding a hatch for engraving surfaces rather than just lines.

This is the start of my file prep in Rhino with dark areas signalling ‘hatched’ sections for surface engraving. 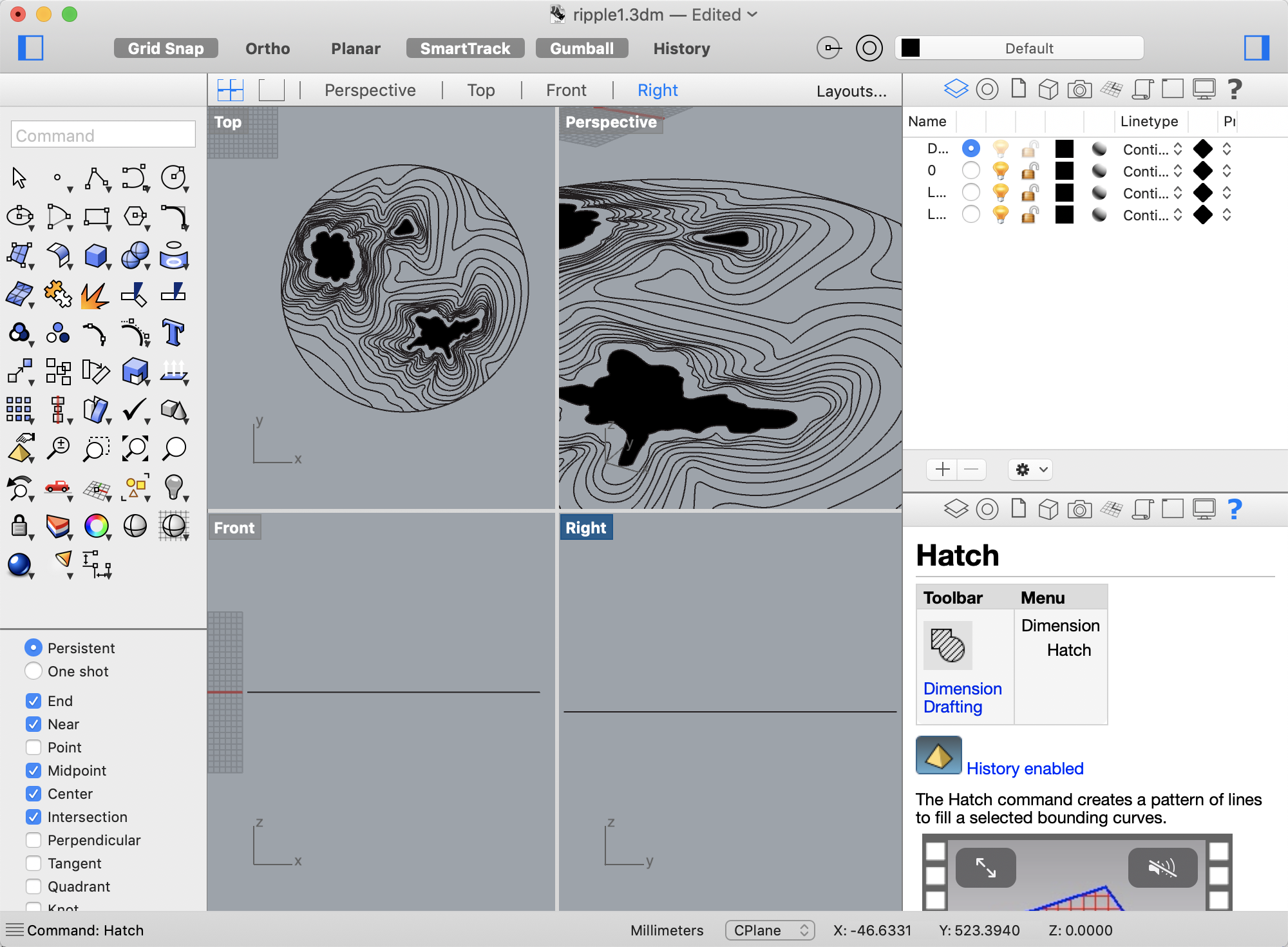 Once the Petri dishes arrive, I can make time with the CAM technician Murray Antill to organise engraving. Of course, I need to test the settings first to ensure that I use the correct strength for lines vs. engraving. I usually use Perspex, so I will likely need to adapt the settings to suit a different material. The lines may also need further spacing as the laser produces around a .5mm line.

As I continue to develop the project, I am looking into other artists working with cell immortalisation protocols.

A recent project involving the immortalisation of primary cells is the work Immortality for Two which forms part of a dual body of work collectively titled I’am by Luís Graça and Marta de Menezes. In contrast to the aims of the Billy Apple® project, this work reflects on the artist de Menezes and scientist Graça’s long-term working and romantic relationship (de Menezes M & Graça 2020). I purchased ten borosilicate glass Petri dishes last week in each size [1500mm and 900mm]. This will enable me to do the engraving and materials tests while I wait for ethics approval.

I am going to start with some simple designs that connect to motifs from my previous practice and signal notions of ongoing development and ‘rippling outwards’. 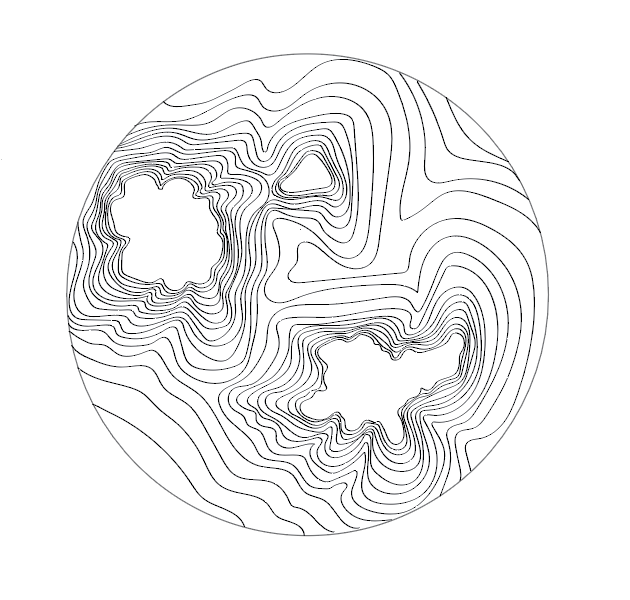 This design was originally created for The Contamination of Alice #9 as part of the group show Ghost Biologies at Contemporary Art Tasmania in 2016. I feel that a similar pattern could work quite well engraved on the base of the Petri dishes. However, I will need to include some etched ‘shaded’ areas to see if scarring the surface helps with cell adhesion.

To create the new designs, I will try to work directly in Rhino – the software platform used for the laser cutter. Hopefully, this will enable me to create designs will fewer nodes to reduce clean up time and double lines.

My primary lab contact is currently on leave so I am using the time to identify materials for experimentation. I am keen to grow and stain my cells on diverse materials (glass, porous and non-porous scaffolds etc). An easy start is to use glass Petri dishes with different coatings to encourage cell adherence. The use of coatings may also enable me to encourage cells to grow in particular patterns.

I’ve done a bit of searching via Researchgate and it seems that common surface coatings to encourage cell attachment to glass include:

I will ask for advice at the next lab meeting.

There were also suggestions to etch the glass surface with concentrated nitric acid and then wash and autoclave. At the UTAS School of Creative Arts and Media, we are fortunate to have access to a glass cutter and laser engraver. So instead of using acid, I will use the laser to score a design into the base of a large 150mm Petri dish. Luckily Petri dishes are easy to purchase online. I just need to make sure the dishes are suitable for autoclave sterilisation (e.g.  borosilicate glass rather than soda lime glass).

While I plan to spend quite a bit of time in the lab, the Synapse residency is also giving me space to experiment with new creative materials that complement the focus of the research. In particular, I plan on moving forward with chameleon pigment experiments – I have been obsessed with them since the start of the year.

Chameleon pigments are essentially powered colours that have an iridescent quality reminiscent of peacock feathers and beetle wings. What I particularly like about chameleon pigments is that they shift colour depending on the viewing angle. Not only can they shift between two colours (blue-green), some pigments allow for quite a large spectrum shift (blue-violet-red-orange).

My initial interest started with nail polish (even though I never wear it) as there are a fantastic range of chameleon and special effects options available on EBay and other outlets. While nail polish was a good start, the small volumes are unsuitable for larger projects. Therefore, my search took me to find larger volume options. I was delighted to discover that chameleon pigments are quite common in craft project and there are a number of retailers in Australia and overseas that produce chameleon and metal mica pigments for a wide range of applications.  The price of these products is variable, so I have been testing small quantities of powder from a range of companies including Solar Color Dust and A1 Pigments.

With the Synapse grant, I plan to expand these initial experiments to include automotive products, as chameleon pigments are also available as for custom car painting and detailing in powder, paint and spray form. Perhaps they will even work to highlight fixed cells on glass. Despite UTAS improving the turn-around time for ethics clearance applications, it will take some time for the new application to be processed. Of course, we do not want to be idle, so the time pending formal approval will be used for project training.

While I have worked with cell and tissue culture previously as part of my PhD study at QUT, it has been over five years since I have actively worked in a lab environment. As such, it is important that I undertake training to ensure I am up to date with protocols and understand the working methods used at the UTAS School of Medicine.

To get up to speed, Brad and Jo-Maree suggested that I start working with HBVP Human Brain Vascular Pericyte cells. Culturing HBVP cells will not only enable me to brush up on cell culture techniques, they will also enable me to explore the behavioural characteristic of a different cell type. Indeed, Brad informed me that HBVP cells grow over microvessels and at later passage numbers, tend to form circular formations in culture. Brad and his group have been keen to work with 3D vascular scaffolds as part of their research, so the project and training stage provides an opportunity to work with some of Dietmar’s biofabricated tubes from the QUT Centre for Regenerative Medicine. After all, it is always better if training can also be productive!

These are some of the processes we are expecting to undertake:

Other potential processes include:

I was delighted to hear that my desires for creating aggregates of cells via the production of gastruloids or organoids was not outside the domain of possibility. Jo-Maree has produced neurospheres (balls of neural stem cells) previously, so there may be scope (and hopefully time) to experiment with cell clusters.

Gastuloids are of particular interest to me as they are cell clusters that display features of early embryo development. Staining and fluorescence imaging (apart from being visually stunning) enables the visualisation of tissue organisation as shown in this figure and caption from the Nature publication ‘Multi-axial self-organization properties of mouse embryonic stem cells into gastruloids’: Gastruloids are created from embryonic stem cells, although iPSC cells (cells that have been reprogrammed into a stem cell like state) have also been used. As such, if I have success with reprogramming my fibroid cells to iPSC cells, I could use them to make, and learn more about, gastruloids.

During our discussion, we decided it would be a good idea to include an optional alternative to the fibroid cells – just in case there is an issue with contamination or the freezing/thawing process. While I have isolated skin cells (fibroblasts) from hair follicles and skin grafts previously as part of the HSE Project at QUT, we decided on skin scrapings.   This approach was selected as will enable the isolation of skin cells, is not too invasive and is well established within the School of Medicine.

Once I’ve included this information including the protocol, I should be ready to submit the final ethics clearance document.